When a dead president gives the best testimony…

You know you’re in the twilight zone of Coastal Commission meetings when the absolute best testimony is offered by the President of the United States…..who died 94 years ago!

At October’s Commission meeting, the Commission overrode staff objections and approved the expansion of the San Diego Convention Center. San Diego’s waterfront is increasingly being “walled off” by a series of high-rise hotels and an ever-expanding convention center.

The Commission staff appropriately objected that this second expansion would virtually eliminate the very waterfront park space that was a CONDITION of the first expansion that doubled the Center’s footprint. The convention’s creative solution? A new park….on the roof! Good luck finding that, visitors. Unfortunately the Commissioners bought it. 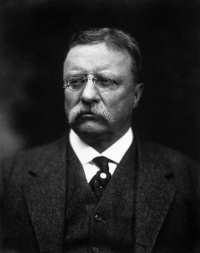 Ironically, the most prophetic testimony against the expansion was offered by none other than TEDDY ROOSEVELT. Teddy’s letter to the people of San Diego, dated 1914, was read into the record. The “then” President said:

“I hope you in San Diego, whose city is just entering in its great period of development, will recognize what so many old communities have failed to recognize. That beauty is not only worthwhile for its own sake but that it is also valuable commercially. Keep your waterfront and develop it so that it will add to the beauty of your city. Do not let a number of private individuals make it hideous with buildings and then force your children to pay for them an exorbitant sum to get rid of the ugliness they have created.”