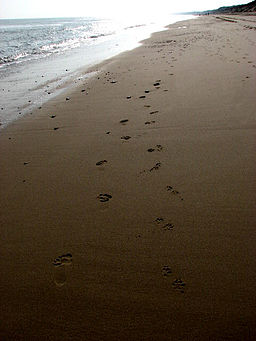 Locating wet sand is the easiest way to identify public land on beaches being claimed as private. — Unfortunately, there are some beaches in Malibu where private homeowners have a notorious history of wrongfully keeping beach goers off public beaches; which was most recently the case at Escondido Beach, in Malibu.

As reported by both CNN and the LA Times, Noaki Schwartz of the California Coastal Commission went to Escondido Beach with her young daughter on August 29th. Armed with her love of the beach, her professional knowledge of the California coastline and its operation, as well as a map identifying where the varying lines of public and private land along the beach lie, Noaki set out as a well-informed citizen to enjoy public access to public beaches.

However, the security guard hired by the Escondido Beach-bordering homeowners association was not onboard with this plan.

He informed Noaki, as other beach patrons had also been informed, that where she stood was private property. He continued to say that if she did not move that she would be fined a $1,500 trespassing fine and ‘lifetime banishment’. Oh, and yes, the police would also be called to enforce this.

Even with the proof Noaki had that she was, in fact, on public land- the LA County Sheriff’s Department was called.

What this very real and very sad story highlights is the ongoing struggle to keep public land available to the public, the issue of public funds being used to cater to the needs of a few beach residents (calling local law enforcement to help keep their not-so-private beach, private), and the burden of proof resting with the public to show they have a right to enjoy California’s natural resources.

While the need to educate the public on what they have a right to is critical, it is also absolutely necessary that public agencies protect the rights of all its citizens. This means enforcing the Coastal Act and the California Constitution, which states that generally the public owns the area seaward of the mean high tide line. The Coastal Commission, in addition, has worked to ensure public access in addition to the ‘mean high tide line’ rule of thumb as well as lateral easements that provide additional areas of public access.

If you’re looking to enjoy the Malibu coastline, there’s even an app to show you where you have a right to access. Check out Our Malibu Beaches while you work to get informed as to what you, as the public, have a right to enjoy responsibly.