Each year, approximately 500 million barrels of oil – 21 billion gallons – transit California’s coastline via oil tankers and other vessels. Transporting such an enormous amount of oil in our marine waters creates an enduring risk of a catastrophic oil spill that could cause devastating harm to our priceless marine resources and thriving coastal economy.

The risk of such a catastrophe is real. For example, on September 16, 2015 the 820-foot oil tanker Dubai Glamour was carrying millions of gallons of crude oil when its engine completely failed just a few miles west of the Golden Gate Bridge. A flood tide began to push the powerless oil tanker toward the coast. Thankfully the pilot on board was able to prevent the disastrous accident that could have resulted. Yet, the Dubai Glamour incident is but one example of the numerous propulsion losses, steering losses, loss of navigational aids, and human errors that create the ever-present risk of an oil spill disaster along our coast. 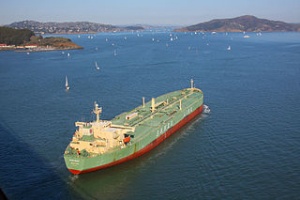 Recognizing the inherent risks posed by transporting so much oil through our marine waters, and in response to the Plains All American Refugio Oil Spill along Santa Barbara’s coastline on May 19th, Governor Brown signed Senate Bill 414, the Rapid Oil Spill Response Act (Act), into law on October 8th, 2015.

One key element of the Act is a requirement that by May 1, 2016 the Harbor Safety Committees in both San Francisco Bay and Los Angeles-Long Beach (LA-LB) perform vessel traffic risk assessments.

The Act requires that these risk assessments analyze:

The presence and capability of tugs to provide emergency towing of tank and non- tank vessels to arrest their drift; Vessel traffic risks based on data from the Coast Guard’s Vessel Traffic Service, relevant incident and accident data, simulation models, and identification of transit areas where risks are higher; and The condition of tank and non-tank vessels calling on the San Francisco Bay and LA-LB harbors based on the Coast Guard’s marine inspection program and port state control program regarding risks due to a vessel’s hull or engineering material deficiencies. This is a tall order, for sure, but a critically important one – no California port has ever had the benefit of a full, quantitative vessel traffic risk assessment (VTRA) that pin-points the type, degree and location of vessel traffic risk with recommendations for area-specific mitigation measures.

Recent VTRAs completed for Prince William Sound, Alaska and Puget Sound, Washington are good examples of the path to success. In both cases, Professors Rene Van Dorp of George Washington University and Jason Merrick of Virginia Commonwealth University worked with local harbor safety committees to apply a quantitative risk assessment model that analyzes all of the relevant vessel traffic data and information. They’ve developed a risk assessment model over many years that has been reviewed and endorsed by the National Research Council.

With their expertise, both Prince William Sound and Puget Sound were able to identify vessel traffic risks with a high degree of confidence, and inform the development of science-backed measures to mitigate the risks inherent in marine transport of oil. With the two professors’ help, California’s VTRAs could be designed to measure the effectiveness of risk mitigation measures already in place as well as to identify the geographic location and degree of new risks and recommend new mitigation measures to address them.

The VTRAs required for San Francisco and LA-LB do not expressly call for engaging these experts, but the Office of Spill Prevention and Response and the Harbor Safety Committees should seek their assistance nonetheless. Without their expertise guiding our processes, it is hard to imagine a successful VTRA that delivers the type of in-depth quantitative analysis and resulting science-based recommendations that we need to better protect our coastal areas and marine environment from the risks of oil spills.

Another important feature of Professor Van Dorp’s and Professor Merrick’s approach is that they always strive to work with all stakeholders in a collaborative analysis:

“In collaborative analysis, the groups involved in a policy debate work together to assemble and direct a joint research team, which then studies the technical aspects of the policy issue in question. Representatives from all the participating groups are given the ability to monitor and adjust the research throughout its evolution. …. The ultimate goal is to generate a single body of knowledge that will be accepted by all the groups in the debate as a valid basis for policy negotiations and agreements.”

Public participation and stakeholder engagement will be essential to the success of California’s VTRA processes. Hopefully our state agency and elected leaders will recognize this, and the importance of utilizing the expertise and collaborative approach of Professors Van Dorp and Merrick. If so, then California’s VTRA processes will yield a robust risk assessment study that increases safety and prevention for marine oil transport along our magnificent coastline.

Amy Trainer is the Executive Director of the West Marin Environmental Action Committee.

This article can also be found on The California Majority Report.