The Shrinking Reality at Broad Beach 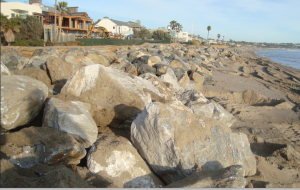 Broad Beach is an exclusive community tucked away on an idyllic beach in Malibu. The community was largely developed in the late 1970s. For the past few decades the community has been contending with a shrinking reality of shrunken beaches. While the community and homes are beautiful, the location of the development is not ideal.

It’s important to stress that Broad Beach is a misnomer. The beach was its largest in the early 1970s before it was fully developed, and even then, it was still not a “broad” beach. Broad Beach began experiencing accelerated erosion in the early 2000s. By 2010, the beach had eroded so much that homeowners sought to build a rock revetment to protect their homes. They were issued an ‘emergency permit” to construct a rock wall, but unfortunately, the placement of the revetment, just like their homes, was poorly planned and result in exacerbated erosion.

At the December 2014 California Coastal Commission (CCC) meeting, the Commission held an extensive, seven-hour hearing regarding a project put forth by the Broad Beach homeowners. In short, the project consists of retaining the current rock revetment and conducting a large-scale sand replenishment project. In the CCC report, Staff also highlighted the need to deal with the aging septic tank infrastructure and improve public access.

The environmental community largely agreed with the CCC Staff report and provided very specific recommendations to improve the project to ensure it will be sustainable and environmentally sound. See a briefing booklet here put together by coastal advocates.

Most Commissioners “saw the writing on the wall” and supported strong permit conditions for the application. Despite making progress during the hearing, the homeowners pulled their application—therefore the Commission was unable to vote on the project at the hearing. Clearly, the applicants realized their project requires extensive modifications in order to obtain Commission approval.

Commissioner Bochco’s statement is important especially as we grapple with climate change and sea level rise. Californians no longer have the luxury to continue to ‘build in harms way’ and ignore impacts of sea level rise. Climate scientists predict storms will intensify in the future and generate more erosion problems. Sea level rise is projected to create higher tide and increased wave height that will pummel the coast and any homes in the vicinity. If we do not pursue climate change adaptation right now, future generations will inherit a quagmire that will make it exceedingly challenging to undo poor past planning.

Homeowners cannot ignore the reality of climate change and sea level rise by taking a Band-Aid approach by leaving rock revetment in it’s current location. It’s time for the Broad Beach community to consider more progressive planning and ditch the out-of-date-thinking that comes along with shoreline armoring and over-sized sand replenishment projects.

Coastal advocates will continue to monitor the project and expect it will be heard in the spring.