Losing What We Love to Truly Appreciate It

As the old saying goes, it takes losing what we love to truly appreciate it. Fortunately, sometimes a glimpse of a different scenario will do. Visiting the East Coast this week has offered me that glimpse, again, of what it is to not have public and unfettered access to the beach.

Can you imagine, what it would be like to have to pay a fee every time you wanted to visit a beach? In California, the simple right to go to the beach is considered as fundamental as our right to breath and free speech, but this is certainly not the case across the country.

I founded the non-profit organization Azul with mission to empower Latinos as coast and ocean stewards. Fundamental to our work is the ability for those not fortunate enough to live at the beach to be able to fully access and appreciate the coastal experience. The communities we work with are some of the most disadvantaged in the state, with the least access to parks and green spaces in their neighborhoods. That makes easy, safe and welcoming access to our world class coasts and beaches ever more important.

For 40 years, protecting and enhancing public access to the coast has been at the heart of the Coastal Act. It is one of the Coastal Commission’s core issues. Yet, any law is only as strong as an agency’s ability to enforce it. The Coastal Commission sorely needs the authority to carry out its extremely important mandate. Every day, its backlog of over 1,800 open, unresolved violations grows faster than the staff can resolve them.

The most prevalent violation (nearly a third of the cases), are where coastal landowners illegally block the public from getting to the beach. Too often they block public trails. They post illegal “No Trespassing” and “No Parking” signs on public property. They fail to provide access required as a condition of their coastal development. They harass and humiliate those that do manage to get to the beach with hired security guards.

Yet, the Commission lacks the both the staff and the authority to levy fines. The result? Violators know they have little chance of getting caught. And if caught, they can delay resolution for years without fear of monetary penalties. So, the open beaches we are so proud of are not so for everybody, instead, they resemble the situation in the East Coast, where money is a necessity to simply access them. 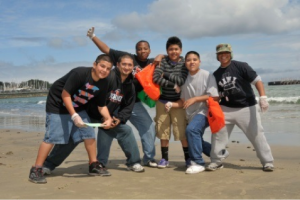 Last year, a bill by Assemblywoman Atkins (AB 976) would give the Commission the ability to levy penalties on these violations. It passed both houses but still died at the hands of powerful lobbyists. Sadly some of the lawmakers who defeated the bill also represent the people who would most benefit from this.

Hopefully 2014 will give these same lawmakers another chance to do the right thing for their own constituents. Because everyone deserves the right of getting to and from the ocean easily, safely, and without feeling like they are unwelcome or undeserving.

California’s coast, beaches and ocean belong to all Californians, not just the ones lucky enough to see them from their home.

Marce Gutiérrez is the Founder and Director of Azul. She has worked with Latino populations to protect California’s resources and foster environmental leadership in under-represented communities. Before working in conservation, Marce worked in the commercial bluefin tuna aquaculture industry. Long story short: she used to sell the fish, now she saves them!