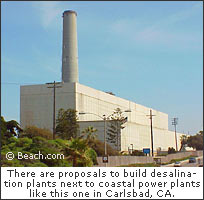 There are numerous proposals to build desalination facilities along California's coast and a 50 million gallon per day facility began operating in Carlsbad, California in December 2015. Desalination (desal) facilities have also been proposed in several other states including Texas and Hawaii and a facility has been built in Tampa, Florida. There seems to be a split between the dialogue heard on mainstream media, which largely focuses on the benefits of desal, and the dialogue amongst environmental and coastal protection organizations who are working to highlight the issues that come with the current over-enthusiastic embrace of the technology.

The stated benefit of desal is primarily to provide a reliable new source of freshwater to supplement finite (or dwindling) existing sources that can not meet projected water demand. However, desal facilities can have several potential negative environmental impacts, depending upon where they are located, how they are designed and operated, and the end use of the produced water. In some cases, there are also concerns about "privatizing" what has always been a public resource, as well as additional complications if a private owner is a foreign entity. Listed below are some of the potential negative impacts of desal projects:

1. Seawater Intake. There are several alternatives for gathering the "source" water for desalination: intake pipes in the ocean, beach wells (seawater aquifers) and intake galleries (collection systems buried beneath nearshore sediment). Unless the seawater intake is gathered from beach wells or galleries there is an inevitable destruction of marine life (fish and smaller marine life like eggs and larvae) as the water is drawn into the desal plant. "Impingement" is the term for the mortality of larger animals that are trapped and killed on the intake screens, and "entrainment" refers to smaller organisms (e.g., larvae and eggs) that slip through the screens and are killed once they enter either the reverse osmosis membranes of the desal plant or the cooling condensers of an adjacent electric generating plant.

2. Brine Discharge. Seawater contains about 35,000 parts per million (ppm) salt. During the reverse osmosis process, water molecules are forced through membranes while the salt particles are retained by the membrane and end up in a "reject stream" that is about twice as salty (70,000 ppm) as seawater. If this were discharged directly back into the ocean or into a coastal estuary there would likely be some negative impacts to sea life in the immediate area of the discharge.

The impacts on marine life are, for the most part, dislocation of indigenous populations. For instance, the marine life normally found in the area of the discharge (the Zone of Initial Dilution ­ or ZID) might be displaced and the area re-inhabited by organisms more tolerant to dynamic salt concentrations and temperatures (e.g., estuarine species). Furthermore, the concentration of dead marine life in the discharge may attract an uncommon congregation of filter feeders and other scavengers. In short, the natural ecosystem is disrupted. The degree of disruption would be a site-specific determination and would depend on variables like ocean current, depth, and perhaps most importantly, how close the discharge is to sensitive and essential fish habitat.

3. Growth Inducement? If the water produced from desal is used to reduce reliance on imported water and more water then ends up being retained in water source areas to help sustain the environment there, then desal may produce a net environmental benefit. If, on the other hand, the water not taken from these rivers is diverted to other users and the river ecosystem doesn't benefit, desal may not result in a net environmental benefit. And if the desal plant fuels new growth along the coast rather than just replacing imported water, it may contribute to overall environmental degradation. This question of whether water is for "replacement" or "new source" is at the heart of the question of "growth inducement."

These direct and indirect concerns about growth inducement are difficult to quantify and analyze without the project proponent identifying the "end user" of the water supply. It is therefore important that any Environmental Impact Report (EIR) or other environmental analysis of the project identify the end user(s). The EIR should also evaluate project alternatives that may have less environmental impact, including water conservation and recycling.

4. Cost and Power Use. Desal is an expensive way to make water and uses a lot of electricity. Water must be pumped through special membranes at about 900 pounds per square inch (psi) pressure to remove the salt, then the water often must be pumped several miles to a water distribution network. Depending on the specific project proposed, water costs to consumers may go up at least 30% and could more than double. The required electrical energy is often produced by fossil fuel burning power plants that cause air pollution and contribute to global climate change.

5. Alternative Sources of Potable Water: As with any social choice, the determination to implement desalination facilities should be compared with other alternatives. Some of the possible alternatives include improved water conservation and greater implementation of wastewater reclamation.

Water reclamation is the practice of treating wastewater to allow re-use of the water. Although there has been considerable controversy surrounding the use of reclaimed water as a source of drinking water, this practice (indirect potable reuse) has been implemented on a large scale. There are also many examples of successful programs that either use this water for irrigation (offsetting the need to use drinking water for this purpose), or for injection into groundwater aquifers (reducing the negative impacts from over-drafting our aquifers and/or reserving this water for potable uses in the future). Besides providing a lower-cost alternative to desalination, widespread implementation of reclamation could dramatically reduce the amount of partially treated or untreated wastewater being discharged into the ocean

6. Private Ownership: Historically, the ocean has been regarded as a public resource to be utilized and enjoyed by all people and animals in a sustainable, non-extractive manner. Using the ocean as a source of drinking water (clearly an extractive use) changes all that. While one desal facility may not have a significant effect on the ocean, many such facilities (see cumulative impacts discussion below) may have detrimental effects.

Typically, most of the water supply infrastructure in the United States is owned and operated by public or semi-public agencies. Quality of the water, reliability of the water supply system, and the price of the delivered water are all subject to the scrutiny of various regulatory agencies, local governmental bodies, and the general public. A water supply system operated by a private company (perhaps a multinational company) may not be subject to the same restrictions. The company’s profit goals may encourage rate increases, reductions in quality, and promotion of more water use, as opposed to calls for more water conservation and recycling.

The subject of ownership by a multinational private company raises additional concerns regarding potential challenges to U.S. laws that a multinational corporation might regard as restrictions on "free trade" or an undue limitation on their ability to make a profit.

7. Cumulative Impacts: An environmental analysis conducted under CEQA (California Environmental Quality Act) or NEPA (National Environmental Policy Act) should include an assessment of the cumulative impacts of not only the proposed project, but also other proposed projects (and existing facilities) in the area. These impacts would include the cumulative entrainment/impingement bioregion impacts, cumulative energy consumption impacts, cumulative growth-related impacts, and cumulative wastewater & urban runoff impacts, among others. This is especially important in areas where existing air quality, water quality or ecosystem health is already compromised. In California, as many as 21 new seawater desalination facilities have been proposed, with a cumulative production capacity of up to 240 million gallons per day. Some facilities are within a few miles of each other, potentially impacting the same bioregion of the ocean and/or other common environmental resources. These projects should not be reviewed in a vacuum.

The Pacific Institute released a comprehensive assessment of ocean desalination in 2006: Desalination: With a Grain of Salt (by H. Cooley, P. Gleick, and G. Wolff).

A follow-up report from Pacific Institute is Key Issues in Seawater Desalination in California - Marine Impacts (2013).

The Municipal Water District of Orange County (MWDOC) published in 2007 their findings from the pilot sub-seafloor intake study they conducted at Doheny Beach in Dana Point, CA. More on the proposed seawater desalination facility in Dana Point.

Proceed With Caution - California's Drought and Seawater Desalination (NRDC, May 2014).