Heavy rain, high winds and giant surf have been roaring in off the Pacific Ocean in recent weeks as this year’s El Niño has begun. Along our beaches, from Pacifica north to Ocean Beach, a new cycle of coastal erosion is under way. In some locations, this means a threat to beachside homes, businesses and infrastructure.

In San Francisco, we have an erosion challenge at the Sloat Boulevard area of Ocean Beach. Ever since the mid-1990s, waves have been chewing away at the base of the Great Highway and the public access parking lots. In 2010, a piece of the road was continually undermined by the surf until it collapsed onto the beach. Today, a nearby wastewater pipeline is under threat from the encroaching sea. In order to protect our city infrastructure, the San Francisco Department of Public Works has added large boulders to the shoreline. The boulders absorb wave energy before it can cause further erosion and damage.

Shoreline protection devices such as seawalls and rock revetments may be useful in protecting threatened development. Unfortunately, they can also lead to the destruction of our beaches.

For example, boulder revetments such as the ones at Ocean Beach cover what remains of the sandy shoreline. The rocks choke off public access to and along the beach, are unsightly and can spread erosion to the adjacent area. Seawalls are often harmful in that they block our shorelines from migrating inland. When this happens, beaches become submerged as the tidal zone advances to the wall. This has already occurred along much of Pacifica’s beachfront and is beginning to take hold at Ocean Beach in the area south of Sloat Boulevard. 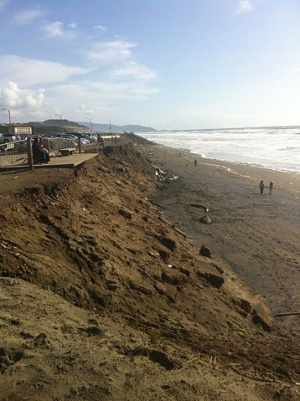 Even without this year’s El Niño, much of the Bay Area coastline is undergoing a state of progressive erosion. To preserve our beaches, the Surfrider Foundation is calling for local governments to begin planning for the future relocation of threatened development. This is known as managed retreat.

The conventional response, which is to rely on sand replenishment, is costly, temporary and does not really fix the issue at hand. In many cases, sand is in short supply, rendering beach replenishment unsustainable. By relocating structures whenever possible, we gain a real long-term solution that both safeguards development and protects our beaches.

In an era of sea-level rise and climate change, we hope to see managed retreat become a more common practice. After all, our beaches and coastlines are precious jewels that belong to the public. They should not be permanently destroyed to protect improperly located development.

Lifelong surfer Bill McLaughlin has surfed at Ocean Beach for 30 years. He is the Restore Sloat Campaign manager for the San Francisco chapter of the Surfrider Foundation. This article was first published by the San Francisco Chronicle.