Surfrider originally sued the City of Dana Point, and developer Headlands LLC as the Real Party in Interest, for their actions to take away the public’s beach access. Surfrider’s suit challenged the City’s “urgency ordinance” declaring existence of a nuisance at Strands Beach in order to mandate the enforcement of restrictive closure hours and gates for Central and Mid-Strands Accessways. Surfrider won its case at the lower court in 2011, with a ruling that held the City’s actions were “arbitrary and capricious”. In the most recent court ruling, Judge Randa Trapp ruled that the City acted with “pretext” in issuing the urgency nuisance ordinance as the original justification for the beach access restrictions at Strands Beach. There have been various appeals and delays that have kept the litigation active until this settlement.

The terms of the Settlement Agreement provide the ample beach access that Surfrider has been requesting throughout this battle. In addition, the City has agreed to up to $300,000 worth of mitigation to settle the years of Coastal Act violations that this beach access issue has implicated. Here are more specifics about the terms: 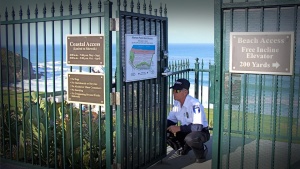 First and foremost, the agreement settles the hours and gates on the controversial Central and Mid-Strands access ways. The settlement ensures that there will be access from 5am until 10pm on the Mid-Strand and Central Strand accessways, which were at the heart of the controversy. Also, the gate at the Mid-Strand accessway must be either removed altogether or locked open 24 hours a day with the wire mesh and spikes at the top of the gates removed. The settlement also guarantees public access on the South Strand Switchback Trail and on the lower Strand Revetment Walkway to be open for 24 hours a day. The Strand Vista Park will be open from 5am to 10pm, as well. The City will delete its prior approval of gates on the Mid-Strand and Central Strand Beach Access, but may go before the Commission to seek a Local Coastal Plan Amendment for the gates.

As for other mitigation to settle the years of ongoing Coastal Act violations, while not admitting to the violations, the City agreed to the following:

- Construction of two more connector trails, the “Trail Connection to Selva” and the “Trail Loop Connection” for access and a public view overlook platform;

- Installation of two new bike racks at the top of the Mid-Strand Accessway and the top of the South Strand Switchback Trail and install six cement-cast benches along the Revetment Trail;

- Development of a mobile applications linkage to Coastal Commission beach access and public amenity information, as well as enhancement of the Commission’s web-based application.

- At least $25,000 per year for six years to fund an educational program in conjunction with Surfrider Foundation at the Ocean Institute, with the objective of providing children from Southern California, and in particular from Title 1 schools, with learning opportunities relating to public access and marine conservation at Strands Beach, such as the impacts on coastal resources associated with global warming, sea level rise, and marine debris.

Finally, the City agrees to dismiss their appeal of Surfrider’s case that has been stayed at the appellate court after the City’s appeal of the decision for Surfrider in 2011. The City will also dismiss their suit against the Coastal Commission, which it brought against the Commission in May of 2010, challenging the Commission’s exercise of appellate jurisdiction to review the City’s bogus nuisance claim. The City would also invalidate the underlying urgency nuisance ordinance that it used to allow for the gates and restrictive hours originally.

The Surfrider Foundation will support this Settlement Agreement for signature at the April Coastal Commission hearing and, if passed, consider it a victory for our long-fought battle for beach access at Dana Point Strands Beach.