This "annual report card" coalesced in 2013 with the formation of ActCoastal, a collaboration between the Surfrider Foundation, WILDCOAST and Environment California. ActCoastal reviews the most significant items from each Commission meeting and records each Commissioner's votes as “positive” or “negative” based on anticipated impacts to coastal resources and potential to set statewide precedent. Over time, this provides a historical record of how well Commissioners are upholding California’s landmark legislation, the Coastal Act.

In 2015, in a series of important and controversial decisions, Commissioners weighed in on impacts of private development on public trust lands and beach access, and protection of special places including Marine Protected Areas (MPAs) and Environmentally Sensitive Habitat Areas (ESHA).

The average conservation score for the Coastal Commission in 2015 was 47 percent, down from an overall score of 71 percent in 2014. These low scores recorded in 2015 are indicative of a larger problem: A Commission regularly voting against the interest of our public coastal resources. The California Coastal Commission is clearly headed in the wrong direction, failing to adequately protect our coast and risking the public access rights promised to all Californians.

Governor appointments resulted in the most votes against the coast with an average score of only 35 percent, down from 66 percent in 2014. Commissioner McClure scored a dismal 32 percent, Commissioners Mitchell and Turnbull-Sanders both scored only 33 percent and Commissioner Howell scored 42 percent.

Senate Rules Committee appointments had the most positive votes for the coast with an average score of 57.5 percent, but still a notable drop from 2014’s average of 81 percent. Commissioner Mary Shallenberger achieved the most coastal-minded score of 74 percent, Chair Steve Kinsey scored 56 percent, and Commissioners Dayna Bochco and Roberto Uranga both scored 50 percent. 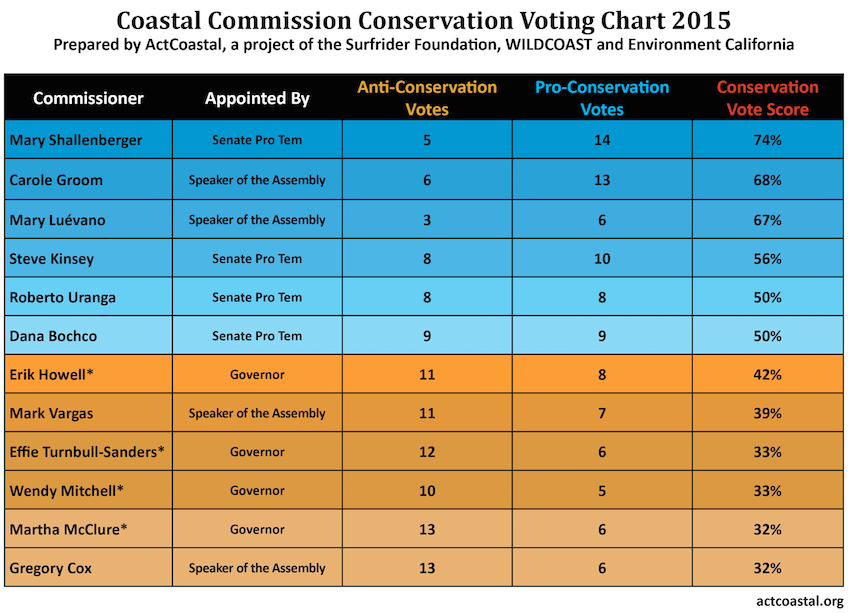 *This page has been updated.